I'm certainly making a habit of posting once a month. Actually, it's pretty cool I'm at least doing SOMETHING in some tangible form of time! =)
Firstly, I would like to state how hilarious the Salt Lake City Undie Run was. Yes, I was among thousands in underwear attire!


Many people had statements written on their body like "equal rights" "yes for gay marriage" etc. And "Joseph Kony can kiss my ass." A run/walk in undies was a time and place to make Utah not so uptight. Well, I'm sure people just wanted to be in their underwear in public. Haha. . . It was pretty fun. 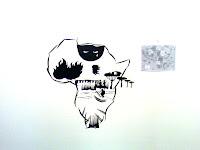 Nextly on the agenda, I recently put up an installation in my Drawing Installation class at the U of U. Each artist chose a specific topic dealing with recent events going on, and we somehow had to collaborate around each other in the space of the gallery. I was pretty quick to choose my topic, which was mostly sprouted by the Lord's Resistance Army (LRA), a religious group that rebelled against the government of Uganda starting in 1987. Joseph Kony, a leader of the LRA, is still wanted by the International Criminal Court (ICC). This Christian group committed a lot of atrocities which included rape, pillage, and kidnapping of children for military purposes. Invisible Children is a good source to learn more information.
The art piece morphed itself into a theme of Africa, and Mother Africa holding her belly, as if to comfort her child. The imagery includes references to the children that were kidnapped. But I hoped it would evoke a sense of the pain that happened, and what will happen in the future. And the world's eye will look upon the pain without closing its eye to it.
During the critique we had in class, I was able to hand out post cards that I obtained from End Impunity, which is a "campaign to stop mass atrocities going unpunished, seek prosecution of the perpetrators, restore dignity to the victims, and provide healing to the affected communities." My class appreciated my activism and most seemed open to what I had to say.
Posted by McKenna Powell at 6:46 PM